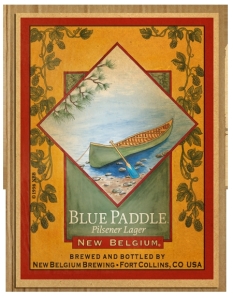 New Belgium has released a new beer called Blue Paddle.  I tried a few this weekend and really enjoyed them.  Blue Paddle;  New Belgium’s first venture into lagers, is a crisp, refreshing brew.  It doesn’t appear to be a seasonal item,  as it has been added to New Belgium’s core beer list.

I do find it odd it was not released in the spring, but new beers from New Belgium, whenever they might be released, are always a welcome sight.

This entry was posted in Vices and tagged Beer, New Belgium. Bookmark the permalink.